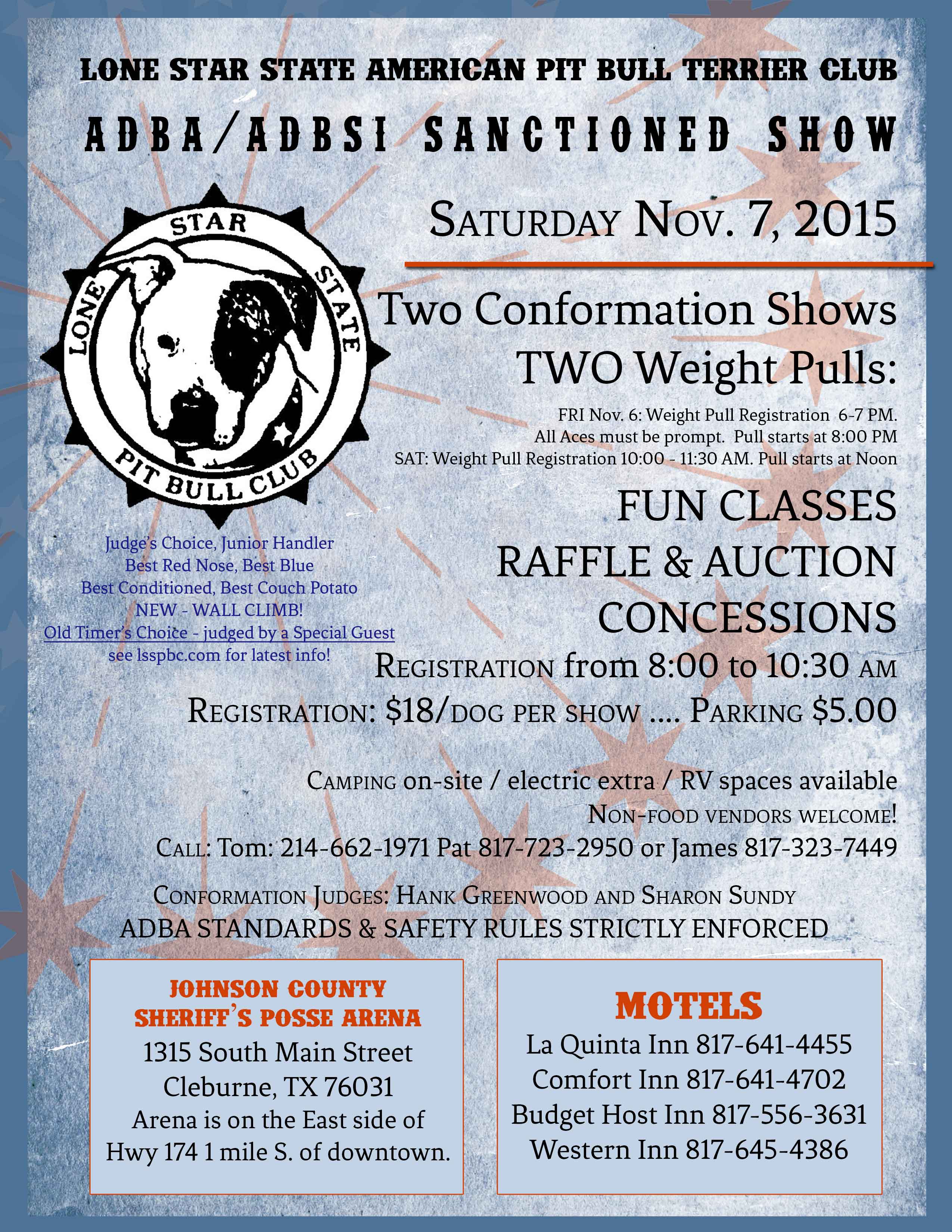 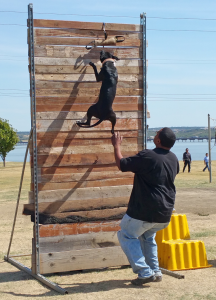 We are planning our ADBA-sanctioned show on Saturday, November 7, 2015.

There will be TWO sanctioned shows and TWO weight pulls. The first weight pull will be FRIDAY, November 6.

Sanctioned Show Entry Form and Weight Pull Entry Form — .pdf file for filling out in advance if you choose.

The location is the same as always — Cleburne, Texas.

Your GPS might steer you wrong to this location, because street names have changed. Please verify with the map below.

We are excited to announce  our next ADBA Sanctioned Show!

Your GPS might steer you wrong to this location, because street names have changed. Google Maps lists this as Johnson County Sheriff’s Posse.

We are excited to announce  our next ADBA Sanctioned Show!

Your GPS might steer you wrong to this location, because street names have changed. Take this map with you.

LODGING: If you call LaQuinta Inn in Cleburne and tell them you are with the dog show you will get another 10% off. Call 817-641-4455, preferably between 7AM-3PM and speak with Amanda. She was very helpful and supportive of the dog show! Also last year they were kind enough to advertise in our ADBA Nationals Program as a sponsor. So say thank you La Quinta! (Sorry for not putting LaQuinta on the flyer – it was a rush and I guess I missed them!)

Here is a flyer and information on sponsorship opportunities for the ADBA Nationals which are being held in Waynesville, North Carolina, October 6 & 7 2012.

Don’t miss out! Download the flyer for the 2012 ADBA Nationals (.pdf).

ADBA Nationals: Letter from our president

The Nationals are over and now is the time to reflect on a job well done.

As we all know this year was a huge year for both of our clubs. Taking on the responsibility of hosting the ADBA Nationals was a huge responsibility and I felt confident that our clubs were up for the challenge. We should all be honored that the staff and management of the ADBA/ADBSI trusted us with this responsibility.

Over the last 25 years or so I have attended many ADBA shows and weight pulls. In the early days of the 1980s we had some very interesting shows. During that time there was the beginning of organized weight pull competitions and this new sport drew a lot of dog people to the shows. I first began showing dogs during this time under the motivation of my friend Gary Hammonds. The shows back then were a lot of fun. There was not too much emphasis put on winning or placing a dog as much as there was just getting out and having a good time. I can remember going to some very large shows and some that could have had better attendance. I can honestly say that I have really never gone to an ADBA show and not had a good time regardless of the outcome.

In recent times I have traveled to most of the shows held in Texas,
Oklahoma, Louisiana, Missouri, New Mexico and Utah for the 100-year ADBA anniversary. The 100-year anniversary show was a very special show and it really motivated me to want to hold a show of that caliber here in the Lone Star State.

Our state is the home of everything BULLDOG and we deserve to be recognized as the home of some of the very best bred BULLDOGS that the world has ever seen. This is something that I have believed for a very long time. The history of our breed and the developmental work that has been done by the people of our state to improve the American Pit Bull Terrier is something that should be recognized and respected by all and forever maintained by the admirers of our great breed.

Many of the all time greatest breeders and fanciers of the American Pit Bull Terrier breed attended the show. Most didn¹t even bring dogs. Their attendance of this event was primarily out of a show of respect for our clubs, its members and the breed we represent. Many of these people have not been to a dog event in many years. Some of them I haven¹t seen in over 20 years. I am honored that these people chose to come out and support us. It is an awesome experience to behold when you think about all the different people from every walk of life that our dogs bring together. Every age race and generation of humanity was in attendance.

I am extremely proud of our clubs and the members who worked so hard to make the 2011 ADBA Nationals such a huge success. The task at hand was given to us to make what we could out of the responsibility of hosting this show.

All I can say is WOW did we ever deliver! I have been told that we doubled last year¹s attendance and many people have told me that this was the best show that they ever attended. We had attendees from as far north as Northern Canada, as far south as Southern Mexico, the Pacific and Atlantic coasts also were well represented. I had countless in attendance come to me and tell me how impressed they were with the organization and professionalism of our clubs.

Several of us were pushed to the maximum of our free time and ability in an effort to make this show a success. Many times it got difficult and challenging but none of us ever gave up. I have always said that you can judge the quality of a person by the character of the people who surround them. Our clubs and our entire membership exhibited outstanding good character during all the challenging times. I am very proud to call each and every one of you my friends first, and club members second.

In closing I will say that we have been handed a great responsibility. That responsibility is to defend the future of our breed. It is this that we all work so very hard for. In times of trouble and adversity I can close my eyes and reflect on all the wonderful times I have spent in my life with my dogs and my inner strength returns to fight another day. I know I am not the only one who feels this way. Many of us demonstrated this ability during the challenging times we faced in the midst of hosting this show.

Well bred bulldogs deserve game owners. Make no mistake about it; we have both in our state. As time passes it will be our responsibility to hand the torch over to the younger fanciers of our breed. We need to demonstrate good sound leadership, responsibility and professionalism when dealing with these young people. They are the future caretakers of our breed. It is our responsibility to teach them the importance of supporting the Endangered Breeds Association, their local club and the American Dog Breeders Association. Together we can be successful in preserving our heritage and the American Pit Bull Terrier.

For a gallery of the winners please see Daline B.’s gallery.

NEWS FLASH! We will be offering ADBA Safe Dog Testing at the Nationals.

Please ask a club member or see the signs and/or flyers for more details when you get there.

Cleburne, TX. This is one show split over two days events. Please contact

The ADBA/ADBSI is pleased to announce:

*A conformation judge’s seminar will be held

We don't share your info, and only send e-mails in case of club/ADBA events & news.